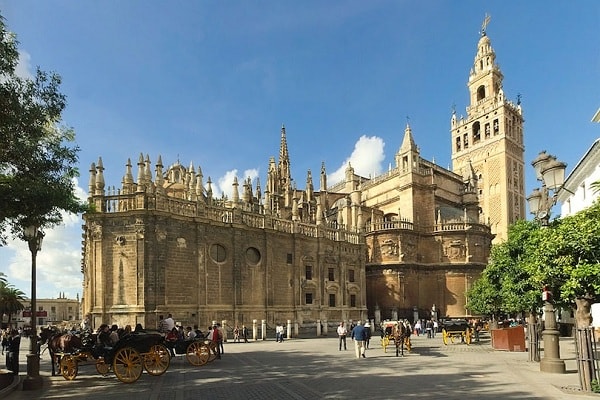 Built on the site of a grand Almohad Mosque, Seville’s medieval cathedral was built to demonstrate Seville’s power and wealth after the Reconquista. At the time of its completion in the 16th century, it supplanted the Hagia Sophia as the largest cathedral in the world. It is still the third-largest church in Europe, and the biggest by volume. The mammoth Gothic structure features an altarpiece depicting the life of Jesus that includes more than 1,000 figures covered in gold leaf. The cathedral’s artistic treasures include Pedro de Campaña’s Descent from the Cross, Francisco de Zurbarán’s Santa Teresa and Bartolomé Esteban Murillo’s masterpiece, La Inmaculada. Within the church’s transept lies the tomb of Christopher Columbus.