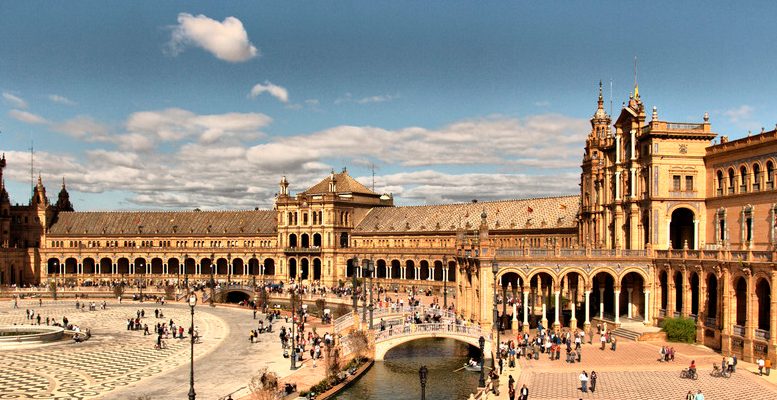 We are a native group from Sevilla, we are art historians and we work as teachers. We are young people who love our city and our culture.

We will reveal the secrets of the city telling you its legends and historial facts. We have decided to explain the history of Seville because we think we are the best to show our city. We are people with energy, native, and with education in History.

The best thing of all, it is FREE, tourists will pay what they want!!!

We start at Plaza Nueva,a well-known place where the town hall is, and we take you throughPlaza del Salvador (oldest mosque,currently second biggest Church of Seville). We move for the old town where we find the Cathedral and Alcazar. There we cross de jewish quarter inSanta Cruz neighbourhood. After passing through Avenida Constitución and Archivo de Indias, we end the tour in Plaza Nueva.

Seville has been one of the most important cities in Spain since ancient times. The city of Seville is known for its beautiful sights, the winding streets of its old town and the remains of differents civilizations which have left  us a big bequest. Since Tartessian culture, Romans, Visigothic Kingdom,  Muslim until today. The tour leads through the main monuments and the history of Seville.

In this tour you will discover the legends and curious facts that Sevilla keeps in its heart. You will go through the same places which were also walked on by well known characters such as Julius Caesar, King Pedro I or Fígaro, “the Barber of Sevilla”.

It is a enjoyable way to visit the city centre and know its hidden stories about revenges, passions and mysteries. If you want to discover the secret Sevilla you just have to come to our meeting point at Plaza Nueva.

Famous for having its own strong identity – it’s known in Seville as “the independent republic of Triana” – this district is celebrated for its azulejos (ceramic tiles), made in workshops here originally using mud from the river bank; its sailors, bullfighters and flamenco artists (gypsies had to live here as they weren’t allowed intramuros, inside the main city walls); and the Inquisition – learn more about this dark chapter in Seville’s history at Castillo de San Jorge, next to the excellent food market.

Word hard, party harder.Enjoy Sevilla´s nightlife in Sevilla multicultural district.We meet at 22.00 where you are getting as many welcome shots as you can drink. At 22.30 we move to our first pub where we are welcomed with a shot and get reduced prices on the drinking list. Enjoy the calm atmosphere in the first pub to get acquainted and get ready for the second and more crowded pub where we go to at 23.30. Finally, at 00.30 we enter the last pub where you´ll get a little surprise. We can not tell you where your night will end. It might be a night you won´t remember, but for sure will never forget¡¡